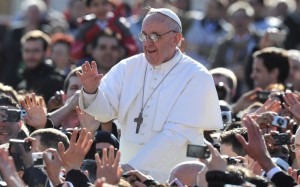 Pope Francis greets his people. Onlookers said he gave some the “thumbs up” sign as he ushered in a more down to earth style. Picture: EPA/ETTORE FERRARI

Our new Pope toured a packed St Peter’s square in an open top jeep, prior to his inauguration Mass on Tuesday 19th. He signaled his wish to get closer to his people, swapping the traditional bullet proof popemobile for an open-top jeep, descending from it to bless members of the crowd behind the barriers.   “All I ask of you is: Pray for me,” he told the crowd of 500,000 worshippers.

In his Inauguration Mass homily, he called on global leaders and all the people of the world to defend the poor and the weak, who he said are “often the last we think about”.